The Lyran Commonwealth has never been regarded as a military power, but it remains a political and economic force to be reckoned with. Though governed by a feudal system like most of the other Successor States, the Commonwealth maintains loose control over member worlds and business interests while actively encouraging a thriving capitalist economy. This, along with the fact that its territory includes some of the Inner Sphere's richest and most heavily industrialized worlds, made the Lyran realm an economic superpower almost since its inception. Work, trade and profit are the central concerns of most Lyrans, who have grown accustomed to high standards of living. The life of luxury even extends to the Lyran military, where power, privilege and prestige are derived from rank—earned as often as not by whom one knows, rather than what one knows or has done.[1] (famous saying:"There's the right way, the wrong way and then there's the Lyran way, which is just the wrong way with lots of assault 'Mechs.")

The people of House Steiner are said to be of European decent, in particular German and Eastern Europe.

At current House Steiner is in a union with House Davion as part of the Federated Commonwealth. 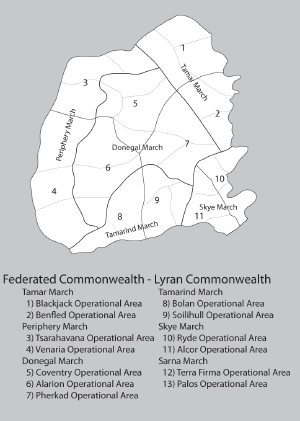 The Lyrans tend to be defensive and have good access to heavier 'Mechs, in particular assaults.

This is an archive of all the Lyran Commonwealth News Broadcasts. Use the