Formed with the signing of the Crucis Pact in 2317, the Federated Suns was intended to stand against the Terran Hegemony's unabashed expansion. However, the Federated Suns faced its first major challenges from the Capellan Confederation. Continued Capellan aggression, including interference in the Suns' disastrous twenty-sixth-century civil war, cemented a deep hatred that has burned between the two nations for centuries. Many Federated Suns citizens harbor similar animosity toward their other neighbor, the Draconis Combine, though this enmity stems from the more recent Kentares Massacre. The Federated Suns has been especially prominent in the thirty-first century. The political and economic marriage of the Suns to the economically powerful Lyran Commonwealth, which together formed the Federated Commonwealth, struck fear in the hearts of many—especially given Prince Hanse Davion's impressive territorial gains during the Fourth Succession War, which coincided with the Federated Commonwealth's inception.[1]

The Federated Suns are allied with the Lyran Commonwealth and are essentially one nation; creating the most powerful economic and military block in the Innersphere. Relations with House Kurita and House Liao are somewhat apathetic, with being invaded by the former and conquering the latter. They also have a distrust of Comstar due to their role in the fourth succession war. 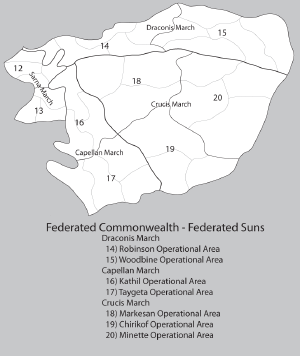 This is an archive of all the Federated Suns News Broadcasts. Use the