The Eridani Light Pony (ELP) is a mercenary corporation for MechWarrior: Online. The ELP was officially founded November 1, 2011 by a group of friends, all of whom enjoy explosions and ponies.

Let it be known that the ELP has no claims to any sort of canon. All ties to the ELH, through name and icon, are purely parodies and do not reflect any attempt at canonical ties to the unit. We are not an ELH spin-off, subsidiarity, etc. etc. We also do not believe we are ponies, call each other ponies, etc. We are people who enjoy a specific show and have thus made/joined a corp based off it, however Battletech is first priority in all matters.

Yes, ponies. My Little Pony: Friendship Is Magic to be precise. The ELP was founded by a group of friends who had a long standing interest and enjoyment in Battletech. They also liked My Little Pony, a cartoon about colourful talking horses. We fully expect that many of you will be put off by this, and you are fully entitled to your opinion. Each of us enjoy the show for our own reasons. If you truly want to know, I'm sure one of our members will be happy to go into a thesis-length discussion on why the show is great.

So who are we?

Eridani Light Pony is home to a wide variety of players. Some of us have been into Battletech/Mechwarrior for over a decade, while others are just starting their love affair with giant stompy robots. Some of us are still in school, and some of us have been working for years. We are a ragtag bunch that spans multiple continents, united by our common interests of spreading friendship throughout the Inner Sphere, one 'Mech at a time. Whether you're looking to play with one of the most highly decorated competitive teams, or just looking for a few fellow pilots to make those drops just a little less lonely, the Eridani Light Pony is the corps for you.

The ELP has a storied history in the realm of MechWarrior Online's competitive scene. The winners of MechWarrior's first ever tournament, the Run Hot or Die Closed Beta Tournament, we faced off against and conquered the game's best players from around the world. The final game between KaoS Legion and ELP was presided over by the No Guts, No Galaxy crew, as ELP took victory in two hard-fought games. It was a great experience for all participants. A full summary of our involvement in this tournament, as well as video footage of the finals, can be found here.

Following the RHoD Tournament, the ELP once again proved their versatility and skill in the Assault-focused Blackthorne's Dragoons tournament, defeating all comers to sweep the tournament with six straight victories and no defeats. A full summary of our involvement in this tournament can be found here.

Most recently, the Eridani Light Pony entered a pair of teams in the Run Hot or Die League's inaugural season. Both teams scored multiple victories, though both fell short of a place in the finals, with the Dark Horseponies coming in third place and the Cutie Mark Crusaders coming in fourth in their respective divisions. The Run Hot or Die league was also the baptism of fire for our European team, where they acquitted themselves with skill and honor. The euro team also cemented our good relations with the Antares Scorpions, whom we've practiced with many times since.

If you need to contact the ELP for any reason, you are free to PM us over on the MWO site, or at our own forums.

The Goals of the ELP

Firstly, having fun is our primary goal. If we're not having fun, then there's just no point. And if we are having fun, then we shall double the fun. Once the fun had been doubled, then we can sit back and enjoy ourselves. In the case that MWO takes on a competitive system much like other F2P MMOs, then we will most likely engage in it, though many of our members are looking for a game to play at their leisure, not a second (or third) job. The extent of dedication will rely on the competitive system in place and the will of the members

Secondly, we will not force anyone to do anything without a good reason. If playing competitively, you will answer to the ranking officer on the battlefield, but you will also have the opportunity to give your own input. You may be asked to play a role (scout, support, etc.) or use a specific 'Mech, but you will never be forced to do so. However, you may be passed up when a support Catapult is needed over your scout Jenner. You will also never be required to participate in competitive matches.

Thirdly, we do not have a required activity level. Only have time to play on the weekends? No problem. As long as we know that you're still alive, you will maintain an active status. However, extended inactivity may result in a shift to inactive/retired status, come back and you'll be returned to active duty with little to no questions asked. Primarily, we want you to do what you want. We won't require, or even ask, that you train for a specific role, 'Mech, activity, or anything. However, you must be prepared for any decisions that occur as a result of that.

Finally, the ELP has a somewhat unique command structure. While we require that you follow the orders of the battlefield commander, we do not intend you to follow blindly to your doom. Your input matters, so speak up. However, there is a difference between giving your opinion and insubordination, which we will NOT tolerate.

If you're interested in the ELP then feel free to join us in our Public Forum. All non-ELP members have full access to our public forums, and you are free to use it whether you're an applicant or just someone who likes to hang out with us.

If you are interested in joining the ELP then please see our Recruitment Forum, or contact one of our recruiters for information on how to join. Please allow some time for your application to be processed. Applications will be locked after a sufficient period of time following final judgement. Once your application is in, relax, hang out, and prepare to answer any questions we have for you in the application thread. You're free to post outside of it too, so don't be shy and think you have to confine yourself.

Currently as the mechanics of Community Warfare are unknown to us all we aren't open to accepting or negotiating alliances with others until we know what an alliance would actually entail in game. This doesn't mean that we can't be friends however! Playing MWO with people you know is a lot more fun than playing it by yourself and we're always open to having more people to play with.

If you're interested in playing with anyone in the ELPMC whether it's with or against us, MWO or otherwise, just send us an e-mail or a PM. If you're contacting us on the behalf of another mercenary corporation however, we ask that you contact us through one of our diplomats. We've already taken part in four community tournaments and regularly scrimmage with and against friends in other corporations, such as The Skjaldborg and Antares Scorpions. We're always looking for more people to play with in both competitive and non-competitive ways so don't hesitate to contact us.

And remember: Friendship is Firepower! 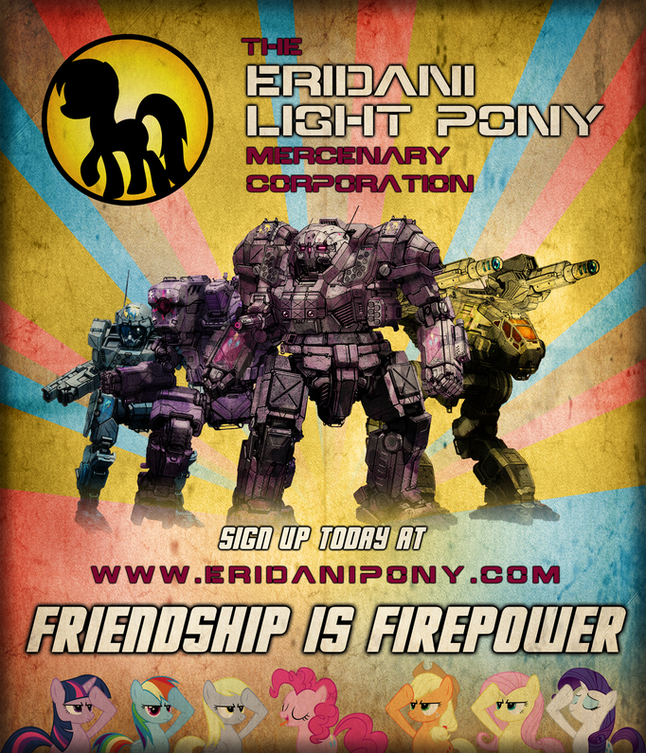