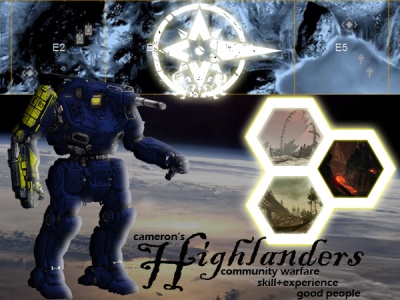 "Cameron's Highlanders united on July 4th, 2013 with twenty-three warriors. We are focused on winning as a merc corps in Community Warfare. Mature and optimistic, we value honor and character alongside skill. We choose chemistry, familiarity, efficient comms and tactics as our path to winning."


Description: Cameron’s Highlanders is a Competitive Mercenary unit of MechWarriors Online™ with emphasis on Community Warfare.

The unit operates without rank as a circle of equals. Each person in the corp utilize their real world skills and knowledge to pursue and push the projects they think will benefit the clan. They self describe as a "no-drama kind of group." With most players having participated in Closed and Open Beta of MWO, the unit has long been preparing for community warfare and are actively recruiting.

Cameron's Highlanders attribute their success to calm and efficient communications during drops and allowing members to fulfill their assigned role in whatever Mech and build they are most proficient (as opposed to being hung up on running or not running meta, flavor-of-the-month builds).