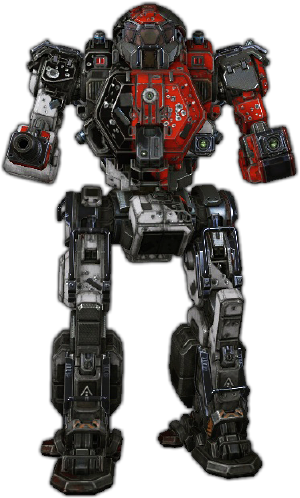 An Inner Sphere collection. The Resistance collection was a special sale of bundles, featuring new 'Resistance' variants of the Panther, Enforcer, Grasshopper, and Zeus BattleMechs. The sale started October 20, 2014. All 'Mechs, badges, and cockpit items were delivered by March 17, 2015.

These are the tiers of bundles that were available for purchase:

The Resistance II collection was announced April 30, 2015. This collection featured new 'Resistance' variants of the Wolfhound, Crab, Black Knight, and Mauler BattleMechs. All 'Mechs, badges, and cockpit items were delivered by October 6, 2015.

Players could also choose to purchase using the a la carte option. Unfortunately this method did not provide any premium time. Nothing was mentioned regarding Faction packs when using this method.

There is no way to purchase additional Faction Packs beyond what comes with the collection, but the items contained within can be purchased separately using

. However, it's worth noting that a Faction Pack will unlock a faction's camouflage style for all of the 'Mechs in the collection, while unlocking it using

only unlocks it for one.

Players can see examples of each of the faction skins on the official Resistance page under the Faction Content section, and clicking on each of the six royal houses.