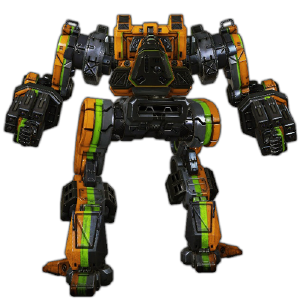 Operation Revival was a special collection introducing Clan BattleMechs to the game. It included a specially skinned -Prime variant of each 'mech with a 30% C-Bill bonus. Unlike Project Phoenix, no Loyalty Point bonus is provided by these uniquely skinned variants. Each came bundled with two standard variants.

An assortment of increasingly expensive packages were available, with the most expensive package being the Masakari package, which included all of the Wave 1 'mechs. Players could also choose to purchase a la carte instead.

Despite an elaborate web page, information on exactly what you were getting was fairly confusing. The entire concept of OmniMechs and their use of interchangeable OmniPods was new, and players had no way to know exactly how they would work until after the new 'Mechs were added to the game. Information on hardpoints and loadout for the -Prime variants was listed, but information on the other two variants of each 'Mech was not available. The limitations placed on OmniMechs, such as not being able to upgrade the engine and not being able to change the internal structure, armor type, or heat sink type, was not mentioned. Also, the web site listed "ECM Capable: No" for the Kit Fox. This was incorrect.

Sold separately were special gold-skinned versions. These cost US$500 each, with no standard variants included. They have the 30% C-Bill bonus. Quantities were limited to ensure they would remain rare.

Wave 2 was announced in September of 2014 and included the Mist Lynx, Ice Ferret, Hellbringer, and Gargoyle.

Players who purchased all of the Wave 1 'mechs (Masakari tier) and all of the Wave 2 'mechs (Man-O-War tier) also received the Mad Dog automatically for no additional charge. This specially skinned Mad Dog was not available for purchase via a la carte. The standard version of the MDD-Prime remains available to all players.

The web page for the Wave 2 'mechs did a much better job at providing information. It provided statistics, hardpoints, and loadout all of the variants for each 'mech, and it listed critical hit slots that were filled with non-removable equipment, such as "Fixed Armor Slot", "Fixed Structure Slot", etc.

Wave 3 was announced in February of 2015 and included the Arctic Cheetah, Shadow Cat, Ebon Jaguar, and Executioner.

The Wave 2 collection was the first collection to offer Faction Packs.

There is no way to purchase additional Faction Packs beyond what comes with the collection, but the items contained within can be purchased separately using

. However, it's worth noting that a Faction Pack will unlock a faction's camouflage style for all of the 'Mechs in the collection, while unlocking it using

only unlocks it for one.

Players can see examples of each of the faction skins on the official Wave II page under the Faction Content section, and clicking on each of the four clans.

Like the Wave 2 collection, the Wave 3 collection has Faction Packs, which work exactly the same way. As before, these faction packs only work with the standard variants from Wave 3.

Lore: What the Inner Sphere referred to as the Clan Invasion was known as Operation Revival among the Clans. Ostensibly, the Clans intended to free the people of the Inner Sphere from the greed and corruption of the constantly warring Successor States, and re-create the Star League.