As part of the Unified Community Platform project, your wiki will be migrated to the new platform in the next few weeks. Read more here.

The oldest of the Successor States, the Free Worlds League has been plagued by divisive politics throughout its history. Until recently, this debate between federal and provincial powers greatly limited the League's impact on external events. The current Captain-General, Thomas Marik, a war leader with dictatorial powers appointed "for the duration of the crisis," has done much to centralize power and bring out the nation's true strength. Citizens of the League value their right to express themselves freely—more so than almost any other realm—leading to a broad acceptance of differing cultures and values along with an appreciation for the arts and education. Business and the pursuit of material gain, including the recovery of technology, are central to League life. Ironically, though the League pioneered much of the medical technology used during the Star League era, social pressures have since led many to scorn bionics and other replacement technologies, particularly among the lower classes.[1] 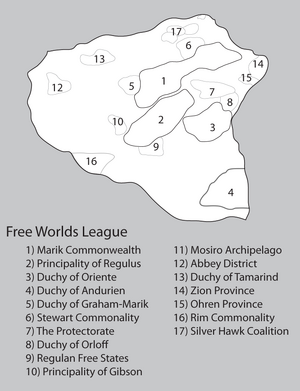 Each House and faction have unique industrial aspects which results in some having greater access to different access equipment than others.

This is an archive of all the Free Worlds League News Broadcasts. Use the