The first full-scale interstellar military operation was launched in 2303, and it eventually led to the formation of the Draconis Combine in 2319. Unlike other Inner Sphere nations, which were formed through the union of already-established alliances of planets, the Draconis Combine owed its birth to one world and the indomitable will of one man: Shiro Kurita. Though Shiro used political wrangling when it suited him, he constructed the Combine mainly by the sword. Raised in strict adherence to the ancient Japanese code of Bushido (the way of the warrior), Shiro spread this philosophy as he expanded his empire. Today, seven centuries after its foundation, the Draconis Combine bears a striking resemblance to Japan of the shogun era, where daimyos—lords—rule their worlds and military districts while their samurai—mostly MechWarriors—enforce their word as law. From highest to lowest, all act for the greater glory of the Draconis Combine and its ruling House Kurita.[1]

Within the Combine's political structure worlds are structured around Military and Government Districts. While the names are the same and the areas they control are nearly identical, there are occasional territorial differences between the two.

Typically within the normal day to day a civilian noble will rule, unless an executive decision is required at this point a military leader will send down the Coordinator's instructions to be followed. 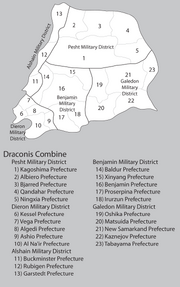 Each House and faction have unique industrial aspects which results in some having greater access to different equipment than others. House Kurita seem to be fond of PPC.

This is an archive of all the Draconis Combine News Broadcasts. Use the