CASE short for Cellular Ammunition Storage Equipment is essentially a specialized container structure for housing ammunition for the situation where the content explodes, like overheated ammunition would do. CASE does not actually stop the explosion, the container's structure redirects the explosive force, making it invaluable for preventing excessive internal damage. Thus, while CASE does not protect the section with the ammunition stored in it, it does prevent damage from transferring to nearby sections (i.e. from RT/LT to CT). After an explosion, units will likely be crippled or nonfunctional, though not destroyed outright.

CASE may only be mounted in torso locations and will contain the explosions of both ammunition and Gauss Rifles.

CASE prevents internal explosions from traveling past the side torso it is installed in. In the above example, it would prevent the 15 points of damage from being applied to the internal structure of the center torso.

Where to Store Ammunition[edit | edit source]

Where ammunition should be stored largely depends on your 'Mech and loadout. Light 'Mechs tend to lose limbs faster than torso sections. A light 'Mech that loses a leg though isn't likely to last long, so it may not matter to the pilot if they lose a leg to an ammo explosion or enemy weapon fire. 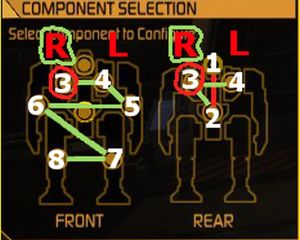