The Capellan Confederation is a survivor, thanks to its greatest asset — its people. A Capellan citizen sees it as his or her duty to serve the nation first and himself second; individual rights are therefore subordinate to the needs of the state. Regarded as repressive by most other Successor States and smaller political entities, this simple trait has allowed the Capellan nation to survive and prosper even after the Federated Commonwealth broke its back in the Fourth Succession War. As always, adversity merely strengthens the Capellan Confederation. Despite what some realms regard as "repressive", individuals are encouraged to better themselves and may marry into a higher caste or qualify for one on their own merits. The only real bias in the Confederation is a favorable disposition toward those citizens who embrace their nation's rich cultural heritage. The Capellan legacy extends back centuries further than that of other Great Houses, having its roots in the ancient heritage of the Han (Chinese) people of Terra.[1]

Capellan Confederation is currently under the Treaty of Capteyn, which makes it an ally of House Marik and House Kurita.

It is openly hostile towards House Davion, but they aren't at war right now. 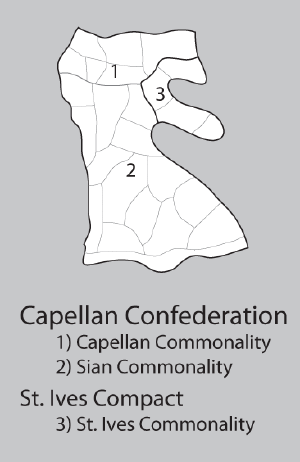 Each House and faction have unique industrial aspects which results in some having greater access to different equipment than others.

This is an archive of all the Capellan Confederation News Broadcasts. Use the