All players, regardless of affiliation, will have access to the same mechs and equipment. Prices may vary between factions, however.


At launch there will be 10 different mechs available for play. Several other additional mechs beyond those first 10 have already been announced:

The devs intend to add roughly one new mech per month between now and launch, and then increase that rate to two new mechs per month after launch. If you’re hoping one of those new mechs will be a quad, you can forget about it. The physics of a quad mech are dramatically different from standard bipedal mechs, and the introduction of quad mechs would take away a lot from the continued introduction of new standard mechs.

Every mech will be equipped with a module board that players can plug individual modules into in order to customize the capabilities of their mech. The module board concept is separate from the familiar crit slot and tonnage concepts. The number of module slots available varies depending on the type of mech. Modules are unlocked on the Pilot Skill Tree (more on that later), and purchased in the in-game store using C-Bills. Any module will fit into any mech.


Here is an example module, Enhanced Night Vision: Effect: Increases the detail of objects while in Night Vision Mode at the cost of reduced range. The module instantly takes effect and anytime the player switches to Night Vision, they will see more clearly, but not as far as the default Night Vision mode. Cost: 4500 CB


There are a myriad of potential effects for modules, from enhancing the capabilities of AMS to duplicating the capability of C3 units, to increasing the number of LRMs that strike true on a successful hit. Obviously, there is some speculation here; these are just possibilities. The one thing we do know is that they are trying to avoid interfering too much with the canon abilities of a mech. There will also be modules that are specific to command functions. Some of these will be required in order to issue orders to teammates.


Modules from different trees (for an explanation of the trees, see Mech Leveling, below) can be mixed and matched in any combination the player likes within a mech. The only limitation on the modules you can use in a mech is the number of module slots that particular chassis has available to it. It should also be noted that modules are a piece of hardware, and can therefore only be installed on one mech at a time. So if you have your Enhanced Night Vision module plugged into your Catapult and you want to use it in your Hunchback, you will have to first take it out of the Catapult. It’s not like you automatically get extra copies for each mech you own. If you get tired of swapping modules around all the time, buy extra copies of the ones you use most.

Weapon systems in MWO are effectively the same as in other MechWarrior or BattleTech games. Weapons fall into one of three categories: energy (lasers, PPCs, Flamers), ballistic (Gauss Rifles, Machine Guns, Autocannons), and missiles (LRMs, SRMs, artillery). All weapons except for energy weapons require ammunition to fire. Narc Beacons, Artemis IV, and TAG are also available.

Ammunition for your weapons must be replenished after each match and can be purchased using C-Bills. Lasers work a little differently in MWO. Continuous beam lasers will stay on and apply damage to the target over time. Pulse lasers will blink on and off in short bursts. This is different from past MechWarrior games, but makes the functionality and appearance of lasers a bit more realistic. It is also a game balancing issue to have them work that way.

Aiming could be a bit trickier in MWO than other games, as well. This is intentional and meant to represent the reality of the way a mech’s arms and torso would move in relation to one another. Although the mech’s torso will always strive to catch up to the position the arms are in (and the aiming reticule that goes with them), it will naturally lag behind a bit. This results in two separate aiming reticules: one for your arms and one for your torso. Additionally, the weapons themselves will adjust their aiming point based on the distance to the target within the reticule. The result here is that if you quickly shift your reticule from a nearby target to one that is farther away and then fire, you will likely miss because your weapons have not yet adjusted to the new range. This will almost certainly result in some comical misses during combat (and some frustrating ones for people who haven’t taken the time to understand this important aspect of the game). That said, there will be an indicator in the HUD to let players know the state of their weapon convergence.

Chain firing weapons will be available at launch. There will also be no rear facing weapons in the game; all weapons will face the forward arc. Minimum and maximum ranges will not fully align with tabletop BattleTech. For example, Autocannon flechettes won’t just vanish into thin air when they reach their maximum range, but rather will keep going until they run out of kinetic energy to carry them forward. As a result, weapons will become less effective past their maximum ranges, but will not be magically useless past that range. The exception is missiles, which will automatically detonate when they reach their maximum range. Minimum range is a little different. Autocannons will still do normal damage below their minimum range, but LRMs will actually just bounce uselessly off the target below minimum range because the missiles have not yet armed.

All Inner Sphere weapons that were available in 3049 will be included in the game. No, I’m not going to list them all, but there is a link to the list in the Appendix.

As with any BattleTech-based game, your mech will have various internal systems in the critical slots. These can be damaged during battle with appropriate effects.


There are only four ways to destroy a mech:

The following equipment is available:

Yeah… I’m not going to dive into the basic controls of piloting a mech. Anyone who has ever played a MechWarrior game before is already familiar with them. If you would like a refresher, feel free to read Dev Blog 5. Here’s a screenshot of the HUD, though: 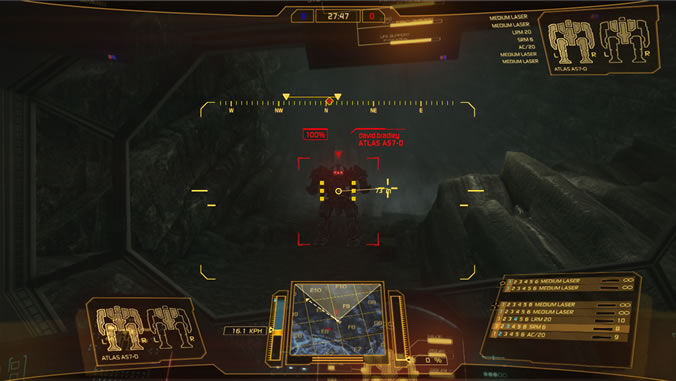 A lot of folks are concerned about what kind of devices they can use to control their mechs. Obviously, keyboard and mouse are the default inputs for control and will be fully supported. The team is also working on being able to support other devices like joysticks, pedals, and HOTAS.


There are a couple important things to note about driving a mech. One is that the speed of torso twist will vary from one mech to the next, with size being the biggest factor. Also, the more articulate a mech’s arms are the greater the range of movement in the arms will be. The amount of articulation in a mech’s arms is based largely on the descriptions of the mech in the original BattleTech game.


One of the most frequently asked questions on the MWO forums is, “Will there be a third-person POV?” The answer, put simply, is no. The only perspective available in the game is first-person, looking out through the windshield, as seen in the above screenshot.