MWO takes place in the Inner Sphere beginning in 3049. For each day that passes in the real world, one day will pass in the MWO timeline. The Founder launch date of August 7, 2012 will equate to August 7, 3049. It is a period of unrest in the Inner Sphere (isn’t it always?), and for those of you familiar with the BattleTech timeline, it is during this month that the Clan invades the Periphery.


A daily feed from Inner Sphere News will appear in the game to keep players aware of current events within the game universe.


It is undecided at this time how, or even if, the community will be able to get involved in historically important battles.


Players will be placed in the role of an Inner Sphere MechWarrior engaged in the day-to-day battles for territory that were so commonplace in the Inner Sphere at this particular time in BattleTech history. For people who just absolutely, positively, must play a clanner… suck it up. While PGI has hinted that the clans will be introduced to the game at some point, there have been no indications as to how or when this might happen. In fact, the words, “Clans will not be discussed anytime in the near future,” were used in a July developer chat.

The history of the Inner Sphere is one of nearly continual warfare. After mankind perfected fusion engines and jumpships in the 22nd century, it wasn’t long before interplanetary empires outside the control of the Terran Alliance began to spring up. Not that Terra didn’t try to control these rapidly expanding colonies, but logistics and political corruption rendered these efforts futile. Somewhere around 2300 the Terran Alliance gave up trying to control all of human space and dominion over the various known regions of the galaxy was given over to the five Great Houses and smaller Periphery states. The Terran Alliance became the Terran Hegemony, and after a couple hundred years of fighting between the Great Houses, Periphery states, and the Hegemony itself, a series of truces were signed. A new governing body was formed known as the Star League, with the Terran Hegemony at its head, though all of the Great Houses participated. 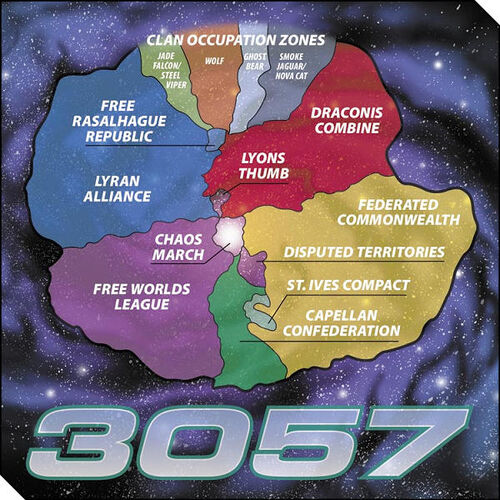 Under the Star League a period that can only be described as “a little less fighting” began, lasting some 200 years. Relative peace was maintained largely through the might and superior technology of the newly formed Star League Defense Force (SLDF), the single largest and most powerful military force in the entire galaxy. All of this peace and quiet came to a dramatic end when a bloody civil war began within the Terran Hegemony, a war which was eventually brought to an end through the leadership and tenacity of the SLDF’s Commanding General, Aleksandr Kerensky, though at the cost of hundreds of millions of lives. With the Terran Hegemony effectively gone, the five Great Houses voted to dissolve the Star League in 2781 with the intent of reforming the League under the leadership of one of the House Lords. The problem was that all five House Lords wanted the Star League throne, and none were willing to concede. Disgusted, and not willing to wait around for the next war to start, Kerensky led three quarters of the surviving SLDF somewhere into the Deep Periphery beyond the reach of the Great Houses. The SLDF would not be seen again for roughly 260 years when they would return under a new name: the Clans.


In the intervening years the Great Houses engaged in a series of four Succession Wars, a period of nearly constant warfare that finally ended in 3030, though some border conflicts continued afterward. The cost of these wars was staggering: hundreds of billions of lives lost, entire worlds’ populations exterminated, several Periphery states extinguished, and centuries of technological advancements lost.

In 3049 mankind is still trying to recover from the devastation of the Succession Wars, and though some minor conflicts continue between individual houses, the wholesale open warfare of the preceding 250 years is over. In general, the galaxy is at relative peace with itself. For now.


Houses Steiner and Davion (the Lyran Commonwealth and Federated Suns, respectively) were joined by marriage in 3028, an event which touched off the brief but significant Fourth Succession War, and formed the Federated Commonwealth. Though still separate in many ways, in 3049 these two houses rule their vast empire (the yellow area on the map above) jointly, and the two houses are becoming increasingly integrated, including their military. According to the canon timeline, by 3049 the Armed Forces of the Federated Commonwealth are almost completely integrated. However, for purposes of making things more interesting in MWO, PGI has apparently strayed from the canon in this one area. As a result, the Steiner and Davion factions will be played separately in MWO rather than as one faction. At least, that’s what seems to be happening.


The Free Rassalhague Republic, which only came into existence in 3034, is a relatively minor player in Inner Sphere politics. Although a playable faction in MWO as a result of popular demand from the game’s fans (nice job there, folks), they are not considered a Great House. It should be interesting to see what happens with the Republic, since by 3052 over 90% of this state’s territory will have been lost to the Clans.


Die-hard BattleTech fans have also noted a significant discrepancy between the MWO map of 3049 and the BattleTech map for the same time period, and that is the St. Ives Compact. According to the canon timeline, the St. Ives Compact formed out of a chunk of Capellan Federation (House Liao) territory in 3029 during the Fourth Succession War. However, for reasons not yet understood by this editor, the small state of 17 systems has been left off the MWO map altogether. Presumably this was done in an effort to simplify matters for the game, a move which is perfectly understandable since the presence of the Compact would do little to enhance the game.


If you are interested in learning more about Inner Sphere history or the impending invasion of the Clans, links to additional reading material can be found in the Appendix.